Local favorite Mikhail Merkurieff has a new survival shelter project on kickstarter that just crossed into the funded category.

I’m a big fan of some of the previous projects he’s done (especially the nice Cabuya Handlines) and I think this is one that is going to be living in one of my kits for sure. The basis is a stronger, lightweight emergency shelter for winter conditions.

I’m sure many of us have used various mylar blankets, or other products to maximize warmth in bad conditions, and make no mistake they can help. However,  there are limitations in most existing commercial products that this product is designed to address. Check out the video, and give it a kick.

I’m really excited to try out the heat capture, which should give large benefits over the basic practice of directing the opening of a shelter to the heat source.  A little less smoke, and a lot more contained warmth would be very welcome. Getting it in a lightweight package that won’t be destroyed just by using it once is even better.

September is here and that means it’s time for the Utah Prepare Conference. Located at the Sandy Expo Center, this conference is a nice stop as it is hosted by the USU Extension, and Be Ready Utah. Speakers, workshops and vendors will be ready to help discuss all aspects of preparedness.

ALSO: We have a pair of tickets to giveaway, which we will pick from people who share this on facebook or twitter! (Selection on September 16th).

The Utah Prepare Conference and Expo started in 2011, and has gone out of their way to be an easy-access resource for Utah families to learn more about preparedness, and resources that are locally available. It’s a great stop for those completely new, to experienced preppers.

One of my favorite prepper toys over the last couple of years has been my Firebox. A small folding stove made here in Utah by a local businessman. It’s been a wonderfully useful little folding stove, although sadly one of my scouts just lost the two pegs (hey guys, do you sell those individually?).

Now even better news. While small and somewhat light, it hasn’t fit the “ultralight” category that can be really nice. But now there is a new product coming out. Check it, and jump over to kickstarter and pre-order this thing.

Right now my decision is just what level I want to kick it at. If you look they have upgraded packages that include carriers, stable fuel, combos with the 5″ classic version and more. Don’t miss this discounted chance to get an excellent stove.

If you enjoy listening to preparedness podcasts, be sure to check out the brand new Survival Mom Radio Network.  This network features a dozen women hosts covering a variety of topics including family preparedness, essential oils, homesteading, and canning.   And I’m one of the hosts!  You can listen right on your computer or download the shows to any mp3 player.  The shows are available by browsing the Survival Mom Radio site or on iTunes.  Go check it out–there is a ton of great information being shared! 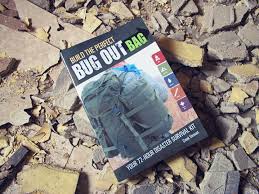 Back in May, I pre-ordered the book “Build the Perfect Bug Out Bag: Your 72-Hour Disaster Survival Kit”. When it arrived a short time later I read through it and was immediately impressed with the job the author Creek Stewart had done. As I was reading it the thought kept emerging that this book was exactly the sort of detailed how-to that we like to do here at Utah Preppers, but on a larger scale. As it turns out, the book initially started out as a blog post on the art of manliness blog. After receiving a good response, Creek decided to work on expanding the concept into a comprehensive how to guide.
END_OF_DOCUMENT_TOKEN_TO_BE_REPLACED

Today (April 17th, 2012) at 10:15 the state of Utah is participating in an Earthquake drill (The Great Utah Shakeout).  This will be the largest earthquake drill in Utah history.

This is a great opportunity to look at your emergency plans.  Have you thought about earthquakes?  Is your 72-hour / bug-out-bag ready to go?

If you are on twitter you can follow @UtahShakeOut and the #shakeout hashtag for more up-to-date info.

It should come as no surprise that the UtahPreppers site will accept advertisers to help cover the costs of hosting. It’s also nice when sponsors are willing to give out some of their products to our readers. So  I’m pretty happy that one of our new sponsors here has a little contest .  The Threat Journal is a free newsletter that focuses on different possible dangers to people in the US, and what you can do to be ready for those dangers. The newsletter covers a broad range of disasters, and discusses the plausibility of each. This should give you the reader a chance to become more informed about various dangers, and decide for yourself how likely they are to affect your family.

For the giveaway, the publishers of Threat Journal are having a drawing for three (3) radiation safety kits.  These packages are designed to help with the three most basic tasks you face during a radiation emergency:

Interested in a day of workshops focused on preparedness? Who wouldn’t?  Utah State University, BYU, and BeReady Utah have combined to host a day of classes and booths called the Utah Prepare Conference and Expo. Now, the title is rather similar to our name, but hey, it involves many groups that we rely on for well-researched information.

I’m really excited about this conference, in that it is *not* a sales machine. BeReady is the state organization charged with getting citizens ready for known disasters in the state, and it has teamed up with some of the best resources for preparedness around. Anybody who has done real research into local agriculture, animal husbandry, or food preservation has come upon materials published by the USU extension. They are the standard for food preservation testing in the country, and we love having them locally.

Of course, there are vendors there as well, so don’t fret about missing out on the “toys” and fun there as well, but the conference itself is not “consumer-first”, and that should mean a lot to real preppers.

END_OF_DOCUMENT_TOKEN_TO_BE_REPLACED

I received this email announcement from a HAM Radio friend.

For any of you who

This is a good event. You can meet some of the organizers and people who’ve been in it awhile, and talk to them about what the organization is all about. Runs from 7 – 8:30PM.

More info here
put your mouse over the New Ham Night on the right.

If you by chance missed out on the premiere of local prepper and UtahPrepper author Phil‘s show, “Meet the Preppers” (bio), then you have another opportunity this Sunday. Animal Planet is going to rebroadcast the pilot episode in order to test the ratings again. If you want an opportunity to see less doomsday, and more family practice, tune in and let Animal Planet know you want to watch more!

Meet the Preppers: My Pink Pistol

Another HAM class is being offered on November 19th 2011 if you missed the last class.

Here are the details from the instructor:

Tonight will mark the official launch of the Preparedness Learning Center (PLC) Podcast on the Prepper Podcast Radio Network (PPRN).  PLC is one of my (Phil801) latest projects, I’ve been working on it for quite a while now and it is getting close to launch time.

I invite you to tune in live tonight (Friday, Oct 21st) at 6 pm MST where you’ll have an opportunity to get on the air with me and hear from a couple other hardcore Preppers – Kelly Alwood of Pipe Hitters Tactical and Kevin Reeve of OnPoint Tactical.  We’ll be discussing what really happens in a crisis situation, both Kelly and Kevin have worked security in several hurricanes, including Katrina, and have backgrounds working with a lot of bad situations.  We’ll also be discussing several current events that are important from a Prepper’s perspective.

If you aren’t able to tune in tonight, you can still download the show from iTunes or from the podcast page.  After show discussion will happen at PreparednessLearningCenter.com as well as the PLC Facebook page.

Hope to see you in the live chat during the show!